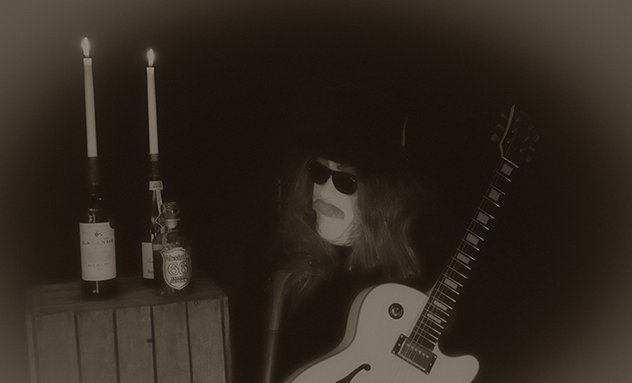 James Jonathan Holkworth was born (at least, that is what he says) outside Huddersfield, England back in the early fifties. He was raised by a single mom who died in a bicycle accident when James was just eight years old. His father, who was an American one-armed slide guitarist, left the family early and James never met him (as far as he knows). He started to play instruments at a very early age. When he was thirteen, he started his first blues band called “No Way Charlott”. They were not successful - not even in Huddersfield.

When he was 16, James moved to Bristol and worked in a store that sold used harmonicas. He stayed there for almost a year. During that time, he made friends with a strange guy who was a Canadian ukulele player and James moved to Louisiana with him (they were only friends) in 1967. His friend, Jeremy Johnson II, started a record label and together they recorded James' first seven albums between 1968 and 1975. The sad thing was that on every expected release day, James got cold feet and bought all the albums himself! He just couldn’t stand to be a star. He had a troubled mind.

In October of 1975, on the expected release day of James' seventh album “I Am Just Here To Serve Chicken”, Jeremy Johnson II disappeared and was never seen again. The police were convinced that he had been murdered; however, a body has never been found. For a while, James was one of the suspects, but a prostitute from Baton Rogue by the name of Pearly Oranges gave him an alibi and the charges were dropped. After that episode, a broken down James moved to Jacksonville, Florida, where he started to work in a flower store. In his spare time, he wrote poems and guitar riffs; he also collected cheap American whiskey bottles. He was at rock bottom.

On Christmas eve 1979, James told his girlfriend, Samantha Mayer, that he was going out to buy cigarettes (he was not even a smoker) and from that day, no one seen or heard anything from him...until now.

In early November 2017, he suddenly showed up at an old friend in Sweden. He only had the clothes he was wearing, a worn out slide guitar and some old tapes with recordings from the seventies. His head was wrapped in bandages, looking almost like a mummy. His words to his friend: “Sorry about my absence. It is time my friend. It is time to finally make history”.

At an early stage in production, they started to look for musicians for the album and the bearded bass player, LeRoy LeDuf from Norrtälje was the first to join, followed by Vetlanda guitar wiz Pete Ledderman. Malmö based drummer Gus Rackbatter stepped in and recorded drums on two demo tracks. James was so impressed that Gus got the job in the band. As James stated: "He has really good looking drums."

As James no longer can sing properly due to an accident with animals in Canada back in 1996, a really good singer was on the top of the list. They searched far and wide and after a tip from another friend, they finally found him. So, the last to join was British singer extraordinaire Adam Barron. "He sounds like me when I was in my prime, so he is extremly talented and also good looking. And he will look even better hanging out with the rest of us", says James about Adam.

12 songs were recorded in September 2018 at Teknikkompaniet in Vetlanda and with them, three videos. The album was released in the spring of 2019 and received great reviews.

In May 2020 singer Adam Barron realized that he would not have the time that it takes to run this rock 'n' roll ship. He will still be a vital part of our project though. We love him!

James will now handle the lead vocals in the band, that now goes under the name James Holkworth Conspiracy.

So you are welcome to join this musical journey